Last year, my friends and I decided to make a trip around Morocco, since it is a very big country and has many contrasts. Our initial plan was: start in Marrakech, spend some days there and in the Sahara Desert, then rent a car, go north and see five different cities, until we get to Tangier and from there, take a boat to Spain. However, things happened and we couldn’t rent a car so we had to redefine the journey. The perfect excuse to come again to Morocco, don’t you think? 😉

Finally, we managed to visit Marrakech, the Sahara Desert, Rabat and Tangier, and I think the trip was the most awesome ever.

Our flight arrived to the city at night, so we took a bus from the airport to the city center (quite cheap, only 1,5€). You can also take a taxi there, because there are a lot of them, but be careful: the first price the taxi driver tells you is going to be very expensive and you must haggle. We were too tired for that and, as we discover later on, we were not very good at it.

The center of the city is called “Medina” and it is a maze of narrow and chaotic streets, full of every kind of transport (people, cars, motorbikes, donkeys, literally everything!). If you arrive at night as we did, be prepared, because there will be no light in most streets and you have to ask for help to somebody there. We met a very nice man that lead us to our hostel and without him we would have never found it.

Our hotel was very nice and most of all, cheap. It was only 5€/night, so I think you can’t beat that almost anywhere. It is called Kif Kif Hostel and it was run by a young and nice man that advised us about the tour in the desert and other trips.

What can you do in Marrakech? Well, a simple search in Google will say to you all the monuments you need to see: Koutoubia mosque, Bahia Palace, Saadian tombs, Menara and Majorelle gardens and walk around the city walls. 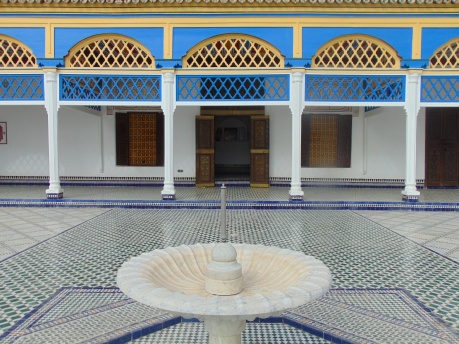 However, in my opinion, the best thing you can do, at least for one day, is forget about the map and start walking around. You will lose yourself in the souk, with all its shops, in every narrow street of the Medina. You will see people working in the street, showing you how they make the products that they sell (many of these jobs no longer exist in Europe). I think Marrakech is not a city to visit museums or monuments like Paris or London, but it certainly is a city to enjoy culture and people. 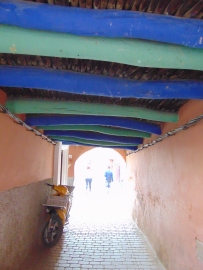 Only one advice: don’t forget to be in Yamaa el Fna at night! It is the main square, where the souk starts and also the culture life. There are many shows at night, families are together, eating, singing and maybe you find some men doing snake charming (so impressive!). If you want to see the square from above, go to Café Argana, which has a second floor where you can see everything. 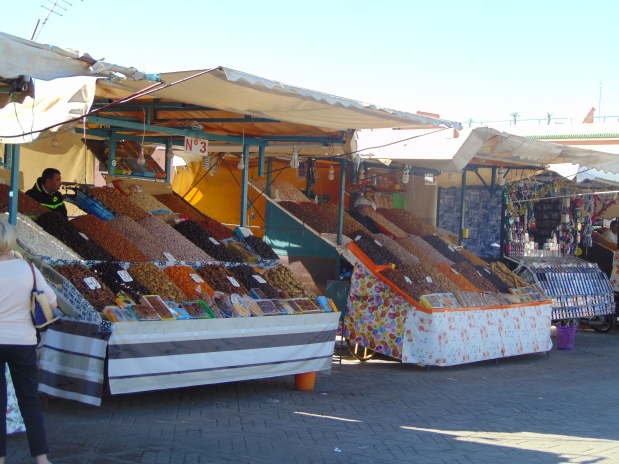 As we were thinking of doing a tour around the country, we chose the option of staying only one night in the desert, but Rouge Hotel has many other options. In our trip, we had a minibus with 10 people that left at 6 in the morning, drove more than seven hours around mountains to arrive to the desert, then camel riding, dinner, sleep in a haima, breakfast next morning and return all the way back to Marrakech. How much you ask? 50 euros! Unbelievable.

During the trip, the driver made some interesting stops. The first one the High Atlas, beautiful and green mountains that will make you forget that you are going to the desert. 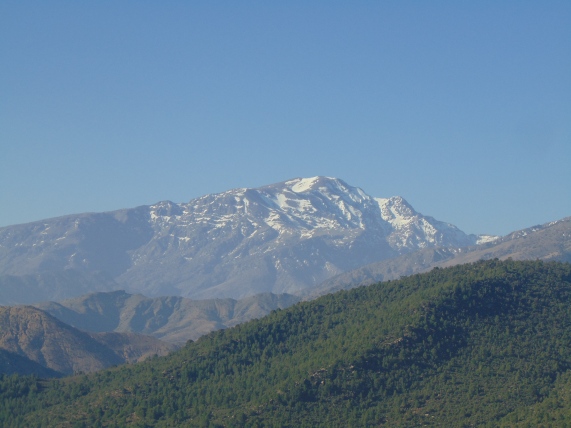 The next stop is Ourzazate and a guide is included. This city, also known as the “gate to the desert”, is one of cities in Morocco that has been used to film movies. In fact, there is a museum of these movies in the city if you feel curious about it (we did’t think it would be worthwhile). The best thing of the city is the Taourirt Kasbah, but you can’t go inside because they are restoring it.

If you go with the same tour we went, be careful, because they will lead you inside a restaurant and before you know it, you will be all set and with the food in front of you. Of course, this is not included in the trip, so you will have to pay a lot in this restaurant. If you can sneak away before, run! 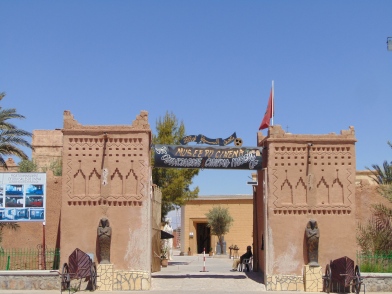 In the end of the trip to the desert, we made one more stop in the Draa Valley. Maybe the term “valley” doesn’t stand precisely for what you will see. The Draa Valley is in fact an oasis, an oasis of 100 kilometers long in the middle of the desert. All the landscape around it is all brown and sandy, but here, you will find a lot of trees, water and lower temperatures.

And finally, we arrived! After seven hours in that bus, we got to the camels. Actually, I am not sure if they were camels or dromedaries, but they were very sweet animals, so it easy to fall in love with them at first sight.

We were on the camels nearly two hours (you will feel that in your legs the next day… ouch!). They took us to the haimas, where we spent the night. A haima is a tent in the desert, used by the nomads that used to live in the desert: they used to travel around with their families and they set up the tent wherever they need to. Nowadays, there are not many families that live this way and I think they are merely touristic. 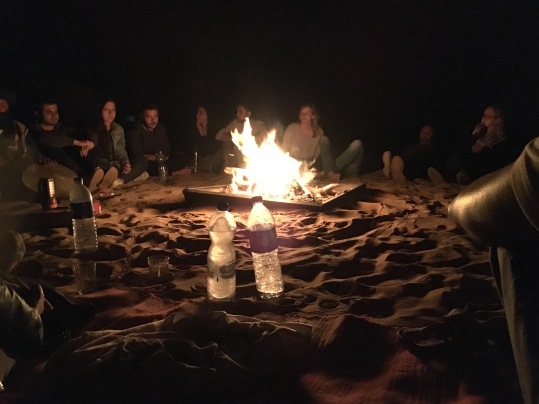 Nevertheless, the boys that went with us were great: they made dinner for us, they sang and played instrument around a fire. Watch the starts in the desert has to be a must in your life, you can’t even imagine!

The next day, they wake us up nearly at 6 in the morning and we could see the rise of the sun. Truly beautiful image. 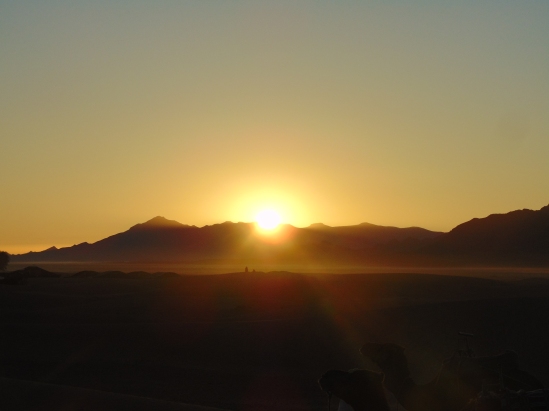 When we were going back, we felt tired as hell. The day before was exhausting! We only stopped once and thank we did, because it was in one of the most beautiful places I have ever seen: Ait Ben Hadou, one of the most famous kasbash of Morocco. And why is that? Well, it is an architectonical site outside the city, almost empty, where only old buildings remain intact. If you are not convinced, I tell you: this is where Gladiator was filmed and also where Daenerys gave her famous speech in Game of Thrones. 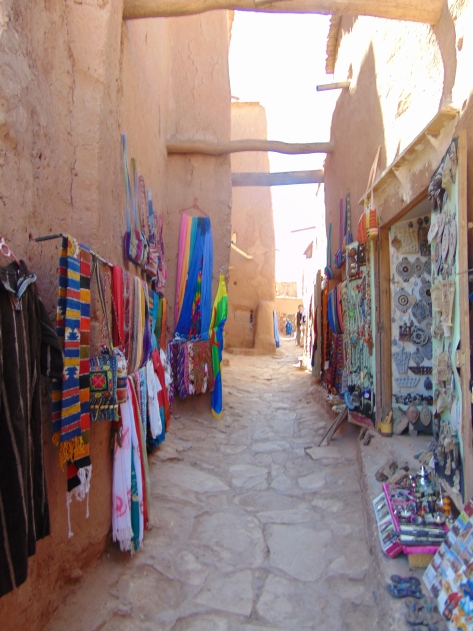 What do you think about our adventure? I think this is one of the places everyone should visit at least once in their lives so… What are you waiting for?!